The recent news that Google has decided to discontinue development of the communication and collaboration environment Wave shocked me when I heard it earlier this month. It's taken me awhile to figure out exactly why I have been so set back and disappointed by the news.

I am not a particularly new-adopter of technology. I got my first Mac computer in 1988, and put off buying a cell phone until business pretty much required it. I tend to lag a bit behind those early adopters, sort of in a second vanguard.

I began using Wave in late 2009 when the application still required an invitation, so in some people's reckoning this would make me an early adopter, I suppose. At any rate, this was a bit unusual for me: to begin using something before anyone else I knew. I played a bit with the interface and waited for the day when Wave would go public; I had decided not to inflict it upon any of my classes as an assignment until the day when it was 'open' to the public. I was delighted in late spring when that day came; I immediately introduced it in a business communications course I was teaching, and had visions of using it in all my classes for brainstorming, planning, initial group work, and the like. I loved the tools for quick polls, maps, mindmapping, porting over to Google Docs; everything was so good. Then Google pulled the plug.

Oh well, maybe the tools will soon be available in Google Docs; maybe that's what Google plans. I don't know. For the meantime, I can cobble together a mass of other applications to do what I had planned for Wave in the fall. Oh, well...(sigh!)

Just today, I realised when I last felt this feeling of loss in regard to computer technology. I spent some years (1995-2000) using mostly PCs instead of Macs. I was using linguistic software that (unfortunately) didn't run on Macs, so I wore out a Pentium desktop and a Toshiba laptop in the intervening years. When I purchased a desktop Mac and a laptop iBook in the early days of OSX, I was startled to find...no HyperCard! (How could they not have HyperCard on a Mac?!? That's just wrong!) HyperCard was this neat way for us programmer-wannabes to tinker with our computers. It was a beautiful, simply-conceived and forgiving programming language that gave me many a night of blissful play, as I saw what others had done, borrowed pieces I could use, and put together address books, grade books, grammar and culture notes collections, text files, and many other database-like products. HyperCard allowed integration of graphics and audio at a time (1990-5) when the PC side of computer technology was trying to figure out why people would want to do file managing from their desktop (Can you say 'Windows 3.1'?). HyperCard was free; HyperCard was ubiquitous; and HyperCard was my friend. Then it was gone... (sigh!)

Buck up, Coach! Time to work with what you have, not what is gone. Learning is still out there! Students are still trying to figure out how to do it! Go!
Posted by thelearningcoach at 18:03 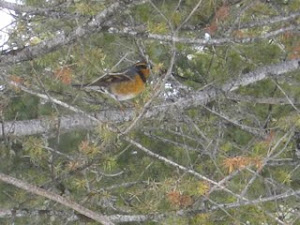